Our website uses cookies to place bookings and help us provide a better service. Continue to use the site as normal if you're happy with this, or click here to change your settings

Rupert Waites and Tom Chisolm started a small company called Buck and Birch in 2012 – their passion and flair for food, flavour and foraging lead them into the pop-up dining scene in Edinburgh.

Chef Rupert, labelled (by business partner Tom) as the ‘Willy Wonka’ of the kitchen – spent time creating a flavoured liqueur with elderberries in his shed. They served the drink as a small part of one of their first dining experiences, and it was an instant talking point! So much of a talking point that diners started to ask where they could buy it - the feedback wasn’t just good it was exceptional and Aelder Elixir was born.

Aelder is handmade in their premises at East Links Family Park near Dunbar. Made with wild elderberries blended with a mix of Scottish botanicals, spices and Scottish whisky – it’s a rich, fruity, smooth flavour experience that showcases some of the best flavours Scotland has in its larder. On its own it is warming and indulgent, or as a modifier for a cocktail or with champagne – it’s a versatile, innovative addition to the marketplace.

Like with many great concepts Rupert and Tom felt the potential for Aelder was huge but they had to start small prove their point, learn their trade and industry (and start to sell some).  Tom comments “It’s a crafted, traceable, inventive product that we love.Had we taken on huge investment from the start, would we have spent it wisely?  I’m not sure, but starting the business on a small craft base with little funding meant we had to be creative with our cash  and I think we learned more that if we’d had a big branding, marketing and sales team behind us. It wouldn’t have had the same feel, it wasn’t about starting with tons of money.”

Tom told us the challenges of finding the right funding for new businesses being one of their big challenges, and being East Lothian based, they made an application for a loan from East Lothian Investments.

“Neither of us were well versed in how to apply for funding but we found the process of ELI to be straightforward. Richard met with us and took us through the stages, and we were delighted when the funding was awarded to us.It was essential to the success and growth of Aelder at such an early stage.”

The team joined Scotland’s Food & Drink County which complimented their efforts in networking and speaking with suppliers, by working with other local food and drink companies it’s helped them grow and find outlets. Tom says “Challenges when you start a business are many – learning about stock and demand levels, ordering in raw ingredients in time, logistics, packaging and cashflow! Also one of the toughest parts of the industry is getting in front of the buyers”.

Working with other companies has resulted in a collaboration with Gilmerton House  where together they are using an acre of land to grow elderberries and experimenting with new growing techniques. Tom adds “We’ve had some great support in East Lothian, we’ve learned from other businesses and people, we’ve not done it alone”

The product is now stocked across the UK, and as a testimony of the quality, is  now stocked at Harvey Nicholls stores, has been featured in the magazine GQ, and is making inroads into the market as a quality drink of choice. It’s an alternative to whisky, still incredibly Scottish, and has clear tourism and export potential which is something the Tom and Rupert are keen to explore. But as with everything they do  they take it step by step, keep the product true to its origins and take opportunities when the time is right.

They’ve grown a business to be proud of “It’s something new, different, crafted by us, you can come and meet us and talk to us about the product  and though our roles in the business will no-doubt change as we grow – it’ll always be a Scottish product we’re proud to have created. We’re promoting East Lothian, and Scotland – it’s a nice thing to do”

Tom summed up the last two years in business.

“It’s been a surreal, exciting adventure and we have learned as we’ve gone along. We’ve also taken on our first employee. The demand for the product was key – people wanted to buy it from us, and I’d not have forgiven myself if we’d not tried it. To see all of the hard work over the last two years come to fruition makes it all worth it, with lots more hard work ahead”

Fund Manager Richard Baty said “East Lothian Investments is an important source of funding for East Lothian based businesses. We are proud of Aelder and I’m delighted our support has helped them to grow the business.”

East Lothian Investments Ltd awarded its 300th loan at its June 2017 Board Meeting.

Chocolate Tree Limited is the recipient of a Ł25,000 loan which will assist the company with its growth and relocation to new premises. This is the second loan the company has received since its start in 2005 and they currently employ 8 full time and 10 part time staff. The relocation will result in a further 2 additional full time and 4 part time staff being recruited.

"Running and growing a small business is no easy feat, we are eternally grateful for the financial support East Lothian Investments and East Lothian Council have given us to realise our latest project. We love East Lothian and feel very privileged to be able to run our business here." 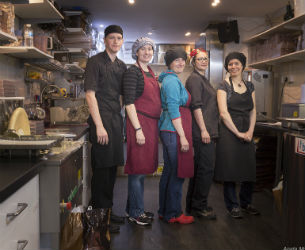 These settings will be stored in a cookie on your device. To find out more about cookies, including how to see what cookies have been set and how to manage and delete them, please visit www.allaboutcookies.org.